As near as we can tell, the popular WS2812 individually addressable RGB LED was released to the world sometime around the last half of 2013. This wasn’t long ago, or maybe it was an eternity; the ESP8266, the WiFi microcontroller we all know and love was only released a year or so later. If you call these things “Neopixels”, there’s a good reason: Adafruit introduced the WS2812 to the maker community, with no small effort expended on software support, and branding.

The WS2812 is produced by WorldSemi, who made a name for themselves earlier with LED driver solutions, especially the WS2811, and SOIC chip that would turn a common anode RGB LED into one that’s serially controllable. When they stuffed the brains from the WS2811 into a small package with a few LEDs, they created what is probably the most common programmable LED lighting solution available today.

WS2812B is an intelligent control LED light source that the control circuit and RGB chip are integrated into a package of 5050 components. It internally includes an intelligent digital port data latch and signal reshaping amplification drive circuit.

What is the ws2812b multi-color led strips and Advantage?

WS2812B RGB LED with Integrated Driver Chip. The control circuit and RGB chip are integrated into a package of 5050 components.

This LED flexible strip is a full-color external control for each lamp bead. It with high brightness can achieve effects of full-color running water, chasing, and scanning.

The WS2812B is no doubt an immensely popular LED Strip and a beloved mainstay of every maker’s blinky projects, given its low driving voltage, high brightness and good color consistency among many advantages. An improved version of the WS2812, the WS2812B is an intelligent control LED light source, with the control circuit and RGB chip integrated directly into a 5050 RGB LED. As a digital LED strip, each addressable LED has an integrated driver that allows the brightness and color of each LED to be controlled individually, that is, an LED can be a different color to the one next to it. Thus, it enables us to create beautiful and complex lighting effects.

How many kinds of ws2812b colored strips are already available in our bazaar.

WS2812 can make more LEDs available in a single meter LED strip, it is 30leds available, 60leds 144leds per meter powered strip. On-demand, we can also modify 74 LEDs per meter or other quantities. WS2812b has only 4legs, but an alternative parameter is possible. 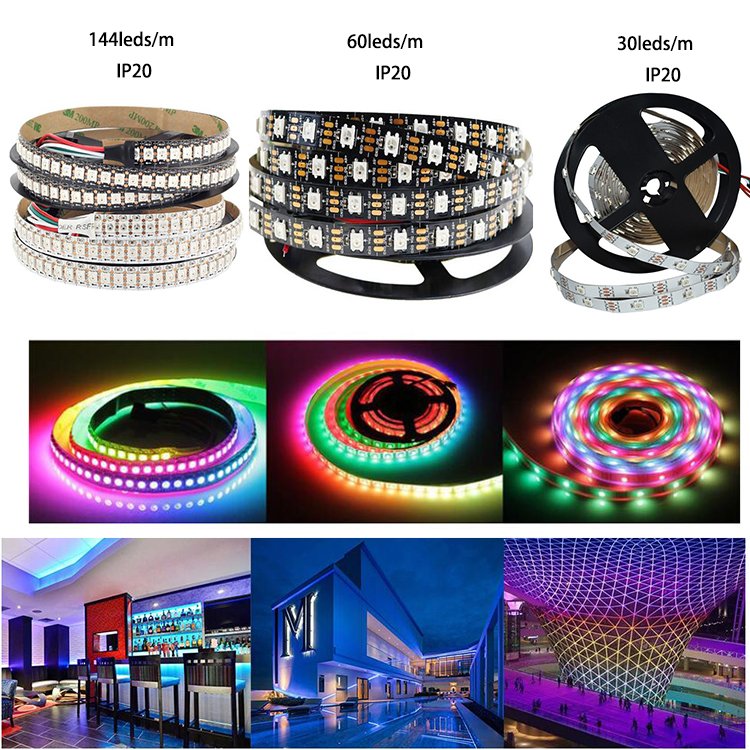 WS2812B LEDs have an IC built into the LED, which enables communication via a one-wire interface. This means that many LEDs can be controlled using one pin on your controller. The LED strips have 3 pins: the power pin (+5V), the ground pin (GND), and the data pin (Din and Dout). The power and ground pins are used to apply power to your strip, while the data pin should be connected to the controller. 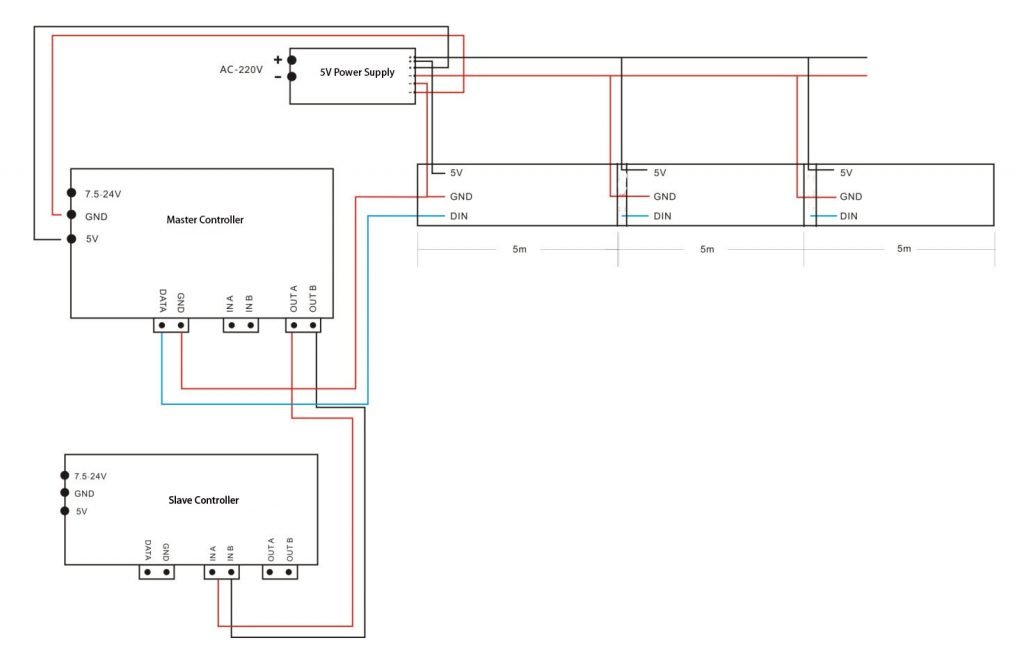 For a strip requiring a power of 5V, there should be no problem controlling it via the 5V output on an Arduino. But if you decide to control your LED strip using a Raspberry Pi or ESP8266 that sends signals at 3.3V, you should convert the 3.3V data signal to a 5V signal using a logic level converter module.

How to choose power supply for WS2812b smart led strip

Both LEDs draw about 60mA at maximum brightness, so power supplies used for WS2812B set-ups are interchangeable. As always, depending on the number of LEDs on the strip or strips you are using, the power required will vary. It is important to select a power source that matches the strips’ requirements in order to keep your strip at an appropriate brightness. Since each LED draws about the same amount of current of 60mA at max brightness.