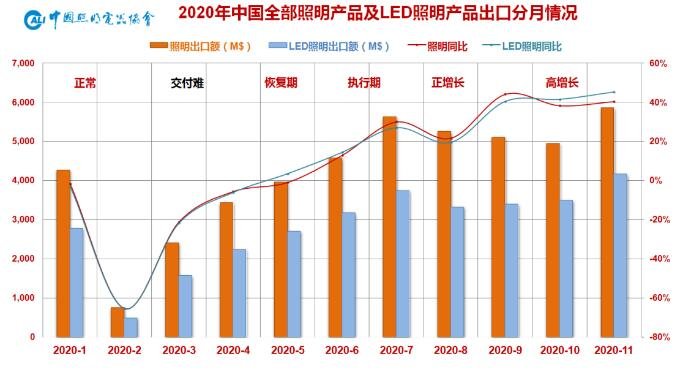 In November 2020, China’s lighting industry exports amounted to US$5.863 billion, a new high for a single month in 2020, with a year-on-year growth of 40.44%, achieving double-digit growth for six consecutive months since June.

Among them, the LED lighting products exports amounted to $4.168 billion, up 45.33% year-on-year, since May has been seven consecutive months to achieve positive growth, not only the highest export value for a single month in 2020, but also recorded the largest year-on-year increase in a single month. Among them, lighting and accessories products growth is very bright.

Month by month, exports in January before the arrival of the epidemic situation is basically stable; February is the most serious period of the domestic epidemic, production and supply chain suffered great resistance, highlighted by orders but difficult to deliver, so the data fell to the bottom; March after the domestic epidemic tends to stabilize the enterprises have resumed work and production to improve the situation, the overall lighting exports rebounded momentum is obvious; April-May production and supply chain to further recovery, and the backlog of orders into the implementation of release. And the backlog of orders entered the implementation of the release period, so the decline narrowed; next, with the spread of the epidemic overseas, the rapid recovery from the epidemic in China’s factories to further highlight the production and supply chain advantages, greatly compensated for the global supply gap caused by the epidemic, June to August for three consecutive months to achieve double-digit growth; and with the transfer of substitution effect continues to amplify, the share of Chinese manufacturing in global exports As the substitution effect continues to amplify, the share of China-made exports in global exports has further increased, with exports in the past three months from September to November achieving significant growth of over 40%.

According to the General Administration of Customs data show that in November, China’s exports of trade in goods in RMB 1.79 trillion yuan, an increase of 14.9%, the growth rate hit a new high of nearly 20 months since March last year; $268.1 billion in U.S. dollars, an increase of 21.1%, the highest growth rate of nearly 33 months since February 2018. 1-November, China’s cumulative exports of trade in goods From January to November, China’s total exports of goods trade amounted to 16.1 trillion yuan, up 3.7% year-on-year, with positive growth for four consecutive months; in dollar terms, it was 2.31 trillion U.S. dollars, up 2.5% year-on-year. China’s foreign exports have achieved six consecutive months of positive growth, while the trade surplus reached $75.42 billion, the highest since the data began to be compiled in January 1981. And our lighting industry exports have been ahead of the broader market for five consecutive months since July.

In November, lighting exports not only continued the good growth momentum since the second half of the year and set a new record high for total exports in a single month. Overseas epidemic is still severe and accompanied by many countries rebound, so scientific research, medical lamps, ultraviolet lamps and other and plant lighting products such as epidemic prevention and house economy-related concepts of product exports to maintain growth; North America, Asia-Pacific and other markets gradually recovered, foreign demand margins have been further improved, the relevant new orders are relatively stable; China’s exports to other countries, “alternative transfer effect ” continues to amplify, the share in the global export market has been further consolidated and enhanced.

2020 has been the past eleven months, the cumulative exports of the lighting industry has exceeded the whole of last year, and made nearly 12% growth; the current lighting exports can be described as supply and demand, based on this, and combined with the relevant export enterprises in hand orders to judge, the total annual exports exceeded 50 billion U.S. dollars will be just around the corner, which will also be China’s lighting exports of the highest ever greatly improved.

Exports record high at the same time, but also to pay attention to the real difficulties faced by export enterprises in the near future, especially since the fourth quarter. Including. 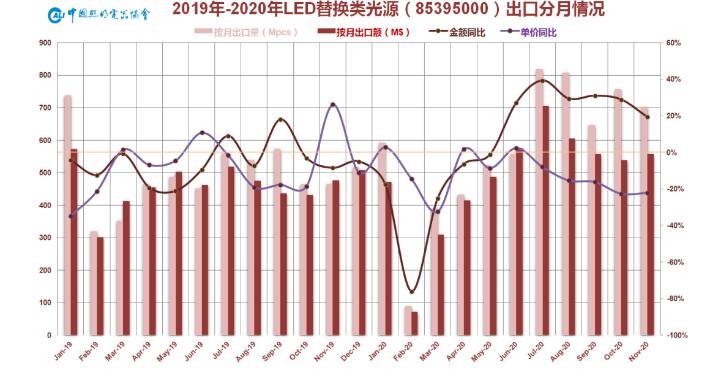 Price competition still continues and intense, profit margins are further compressed. Especially LED light source products, the above chart can be seen especially since the second half of the year, its average export price in accelerating decline. And combined with the rise in the price of fluorescent products in 2020, the two have even appeared between the average price of exports inverted.

It shows that some enterprises face the challenge of the epidemic and industry competition, taking the cost of sacrificing profits to seize market share or just to retain the hope of life.

Exchange rate fluctuations, the U.S. dollar against the yuan has fallen sharply from the previous once broken 7 to 6.5 a line, the profit of export enterprises hit very big.

Also by the epidemic led to further expansion of global demand for Chinese products, the shipping industry since the fourth quarter, the phenomenon of price explosion cabin shortage of cabinets is more common, the product can be made but can not be shipped out to become another problem faced by export enterprises in the near future.

Recently, due to La Niña phenomenon caused by this winter’s abnormal cold and manufacturing recovery boom factors, the southern part of the provinces such as Jiangxi, Hunan, Zhejiang due to electricity tension or to complete the energy-saving indicators, resulting in power outages and power restrictions, the production capacity of some lighting manufacturing enterprises have caused a certain impact.

Lighting exports in 2020 under the ravages of the epidemic still achieved promising data, rare and valuable, on the one hand, you need to pay attention to the difficulties encountered, on the other hand, to plan and prepare for next year.

Looking ahead to 2021 lighting exports, one is the sustainability of the high increase and transfer of substitution effect of products related to epidemic prevention and house economy remains to be observed; secondly, the lighting industry chain still has spillover risks, and the global industry chain may evolve from simply pursuing high efficiency and cost performance to putting supply chain security as an important consideration in the post-epidemic era.

Various uncertainties in the future overlapping factors lead to difficulties in business decision-making and planning, the current global epidemic threat has not been removed, whether people or goods to restore the global flow, it is still a long and difficult thing. It can be said that “the majestic road is really like iron, and now step forward from the beginning to cross”.